Tucows Downloads, the software download site that has been around since 1993, has been retired after more than 25 years of service.

I didn’t know anything about domain names when I was using Tucows to download freeware and shareware software back in the late 90s. 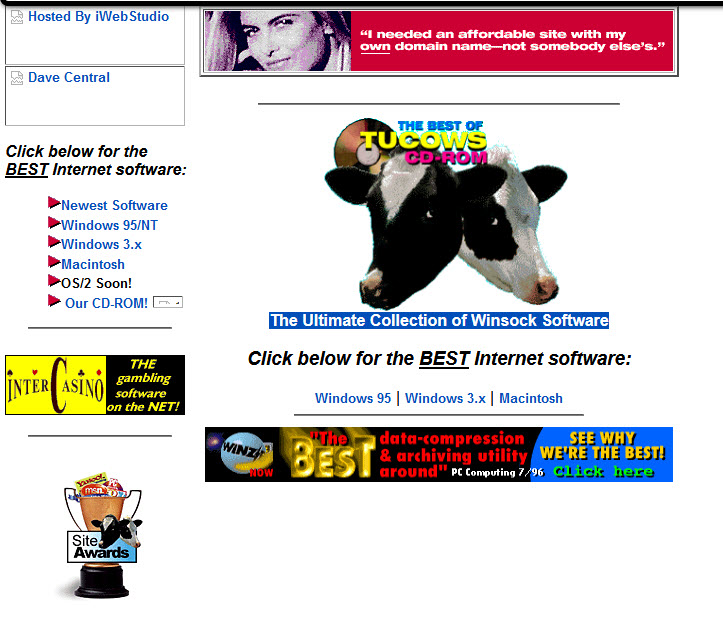 A note to Tucows Downloads visitors:

The shareware downloads bulletin board system (BBS) that would become Tucows Downloads was founded back in 1993 on a library computer in Flint, MI. What started as a place for people in the know to download software became the place to download software on the burgeoning Internet. Far more quickly than anyone could have imagined.

A lot has changed since those early years. Tucows has grown and evolved as a business. It’s been a long time since Tucows has been TUCOWS, which stood for The Ultimate Collection of Winsock Software.

Today, Tucows is the second-largest domain name registrar in the world behind Go Daddy and the largest wholesaler of domain names in the world with customers like Shopify and other global website builder platforms. Hover offers domain names and email at retail to help people brand their life online. OpenSRS (and along the way our acquisitions of Enom, Ascio and EPAG) are the SaaS platforms upon which tens of thousands of customers have built their own domain registration businesses, registering tens of millions of domains on behalf of their customers. Ting Internet is building fiber-optic networks all over the U.S. At the same time, we’re building the Mobile Services Enabler SaaS platform that is powering DISH’s entry into the US mobile market.

For the past several years, history, well sentimentality, has been the only reason to keep Tucows Downloads around. We talked about shutting the site down before. Most seriously in 2016 when instead, we decided to go ad-free, keeping the site up as a public service.

Today is different. Tucows Downloads is old. Old sites are a maintenance challenge and therefore a risk. Maintaining the Tucows Downloads site pulls people away from the work that moves our businesses forward.

Tucows Downloads has had an incredible run. Retiring it is the right move but that doesn’t alter the fact that it will always hold a special place in hearts and our story. We’re thankful to the thousands of software developers who used Tucows Downloads to get their software in front of millions of people, driving billions of downloads over more than 25 years.

A note to Tucows Downloads Authors/Developers

If you’re a developer who used the Tucows Author Resource Center (ARC) as part of your software dissemination, to buy code signing or other services, we’re happy to help with the transition.

Any certificates purchased through ARC remain valid. If you’re looking to buy or renew code signing certificates, we invite you to go straight to the source; Sectigo was our supplier and will be happy to be yours too.
Feel free to reach out to us at help@tucows.com if we can help with anything at all.