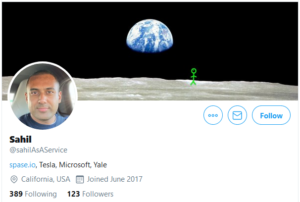 Someone many years ago said that “The definition of insanity is doing the same thing over and over again and expecting different results.”.

Well, it is official! Sahil Gupta, our favorite reserve domain name hijacker of 2020, had done it again!

There is no one stopping Sahil Gupta, wanna be thief of the domain name Spase.com.

Sahil Gupta was found guilty of Reverse Domain Name Hijacking in September for a UDRP he filed at the WIPO (World Intellectual Property Organization).

Now he has filed the same complaint for the same domain name spase.com at The Forum (formerly known as the National Arbitration Forum).

You can read everything about Sahil Gupta, wanna be thief of Spase .com, and his previous attempt here.

So he encouraged NASA on Twitter to file for a UDRP dispute to get nasa.org.