Sahil Gupta, wanna be thief of the domain name Spase.com, falsely reported me on Twitter yesterday. He blocked my account for 12 hours. This is Sahil Gupta’s story of attempting to steal a domain name AND repeatedly being a liar.

Sahil Gupta blatantly lied once again, this time on Twitter, just like how he did on the Uniform Domain Name Dispute Resolution Policy (UDRP) he filed for the domain name Spase.com at the World Intellectual Property Organization (WIPO). This was a UDRP that was denied by a 3-member panel and Sahil Gupta was found guilty of Reverse Domain Name Hijacking.

Sahil Gupta tried to steal the domain name Spase.com from the company that the late Igal Lichtman started many years ago. Igal Lichtman died in 2013 and now his company (Mrs Jello, LLC) and all its assets are owned by his widow Michal Lichtman.

Igal Lichtman earned a Bachelor of Science in Electrical Engineering (BSEE) in Israel and then held various positions as both an engineer and programmer. In 1996, Lichtman was awarded the Ernst & Young Entrepreneur of the Year Award for New Jersey in the “Software” category.

So let’s get back to the part where Sahil Gupta lied a 2nd time in just a few days! Sahil Gupta, from California USA, also known as @sahilAsAService on Twitter, lied and reported me on Twitter for 5 tweets I sent his way.

This loser could not accept calling him out for what he is: A LOSER. 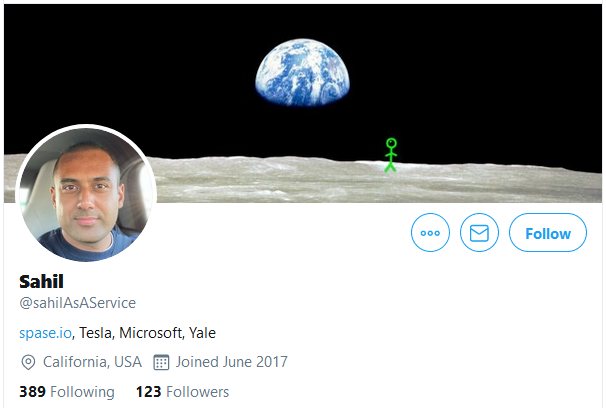 He filed a malicious report on Twitter saying that I violated Twitter rules against abuse and harassment:
“You may not engage in the targeted harassment of someone, or incite other people to do so. This includes wishing or hoping that someone experiences physical harm.”

Of course I did not wished or hoped for him to experience physical harm. I simply told him he is an idiot and a loser and that he should grow up and shut up.

He just lied again just like he did on the UDRP he filed trying to steal the domain name Spase.com. Do you see a pattern here? He is a lying baby.

Twitter says on its rules that it will not action against every instance where insulting terms are used:

Using aggressive insults with the purpose of harassing or intimidating others

We take action against excessively aggressive insults that target an individual, including content that contains slurs or similar language. Please also note that while some individuals may find certain terms to be offensive, we will not action against every instance where insulting terms are used.

Clearly I did not violate any of the twitter rules. You can see the 5 tweets below and judge for yourself: 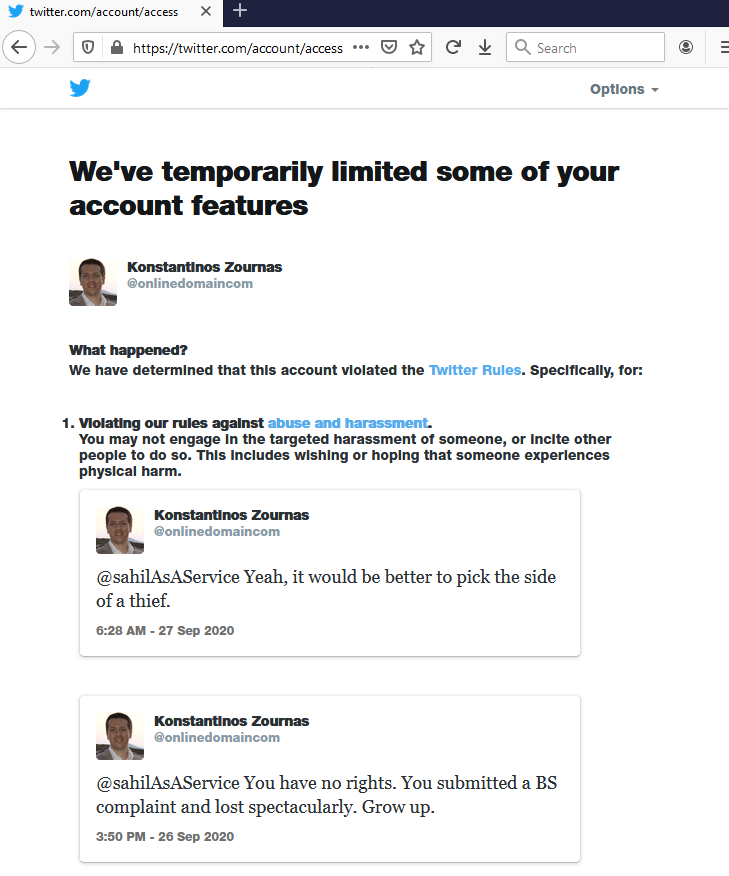 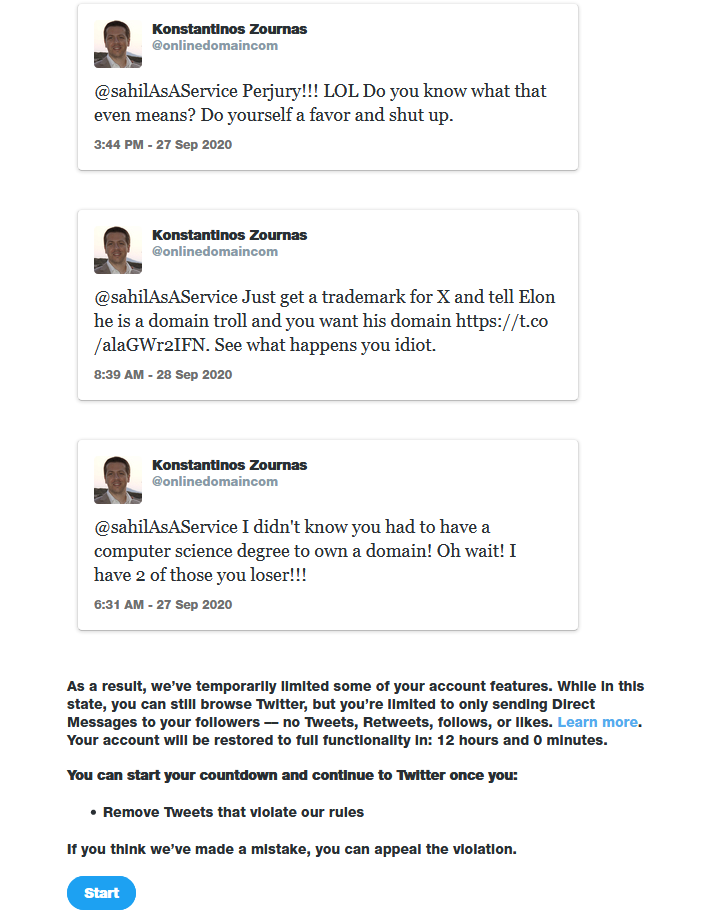 Being a cry baby that he is, he didn’t like me telling him to grow up!

I removed the 5 tweets not because I did something wrong but because it would be the faster way to restore functionality to my Twitter account. I just didn’t want to file an appeal and wait for days for Twitter to respond.

And now we are on you coward! Bring it on Sahil!

So this Sahil Gupta, wanna be thief of Spase .com, falsely reported me on Twitter trying to shut me up. How is that working for you now, Sahil? Have you filed reports on others too? (He actually did file more reports. I found out, after writing this post last night and waiting 12 hours for the twitter block to go away to make this post, that Sahil Gupta filed a report on Twitter against Rick Schwartz for calling him an asshole!)

So, dear Sahil Gupta, let’s see how you like what happens after you lied for a second time in just a few days. A lying CEO is what every company and investors hope for!!!

Now let’s get back to what Sahil Gupta, CEO of Spase, Inc., did.

Sahil Gupta had NO rights to this domain name spase.com created 14 before his company. Yet, Sahil Gupta, that doesn’t like to pay for what isn’t his, submitted a BS complaint and lost spectacularly. It is now time for Sahil Gupta to grow up!

Sahil Gupta is a sore loser and the failed thief of the domain name Spase.com that remained with its rightful owner of 15 years after Sahil Gupta was declared to be a Reverse Domain Name Hijacker by an international arbitration center.

Sahil Gupta’s complaint was denied by a 3-member panel at WIPO (World Intellectual Property Organization). WIPO acted as the arbitration center in these proceedings. WIPO is based in Geneva, Switzerland.

So Sahil Gupta acted in bad faith and abused the Uniform Domain Name Dispute Resolution Policy (UDRP) to try and steal the domain name Spase.com from its rightful owners of 15 years with a groundless complaint.

You can keep on reading about Sahil Gupta on these articles below:

The great problem with ignorance is that it leads to disaster when one acts in the belief that he (and not infrequently a corporate “it”) is invulnerable to error.

In this case, the Complainant wasted money filing the UDRP and paying for a three-member panel as requested by the Respondent. The Respondent had to pay for the panel and hire an attorney. It was a waste of both parties’ time.

It’s clear from Gupta’s supplemental filing and rant that he doesn’t understand this.

According to the filing The Complainant’s business was incorporated as Spase, Inc. in February 2019. But the domain Sahil Gupta attempted to HIJACK was registered in 2005. OUTRAGEOUS! What an idiot! What a fool! What a moron. Is this what kind of people YALE produces?? Is Yale proud of Sahil Gupta?

In a case that has become almost become a social media meme for Reverse Domain Name Hijacking, the CEO of spase.io has been found guilty of abusing the UDRP process by a three-member panel of the World Intellectual Property Organization. The WIPO panel handed up its RDNH decision against Sahil Gupta on September 15, 2020, after ruling he had filed his UDRP in a bad faith attempt to obtain the domain spase.com, owned by Mrs Jello, LLC. 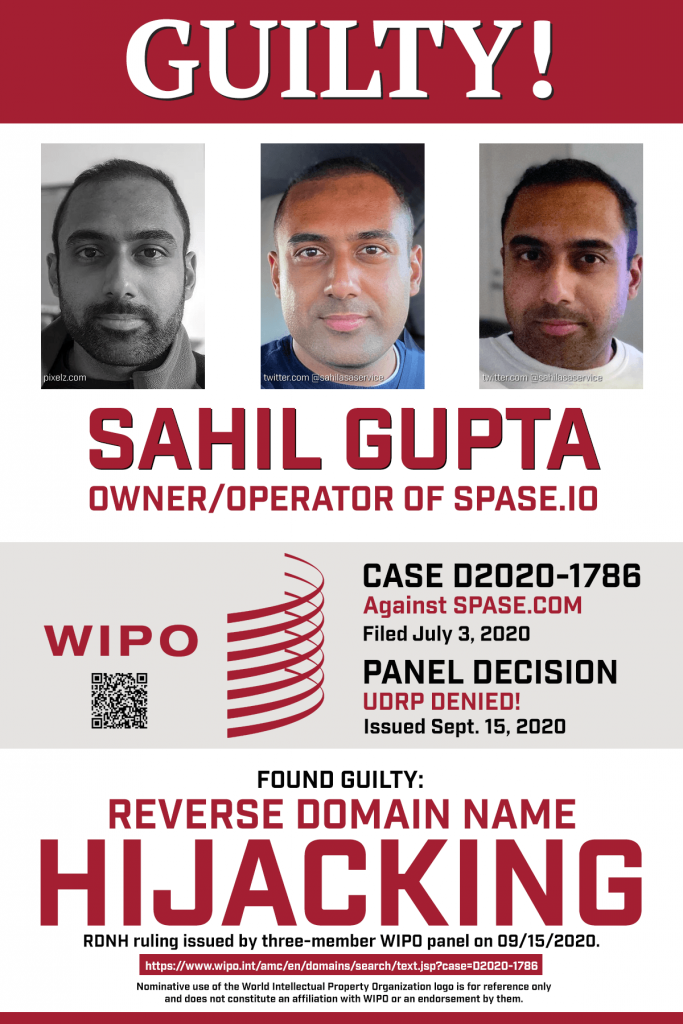 He filed the same UDRP complaint for the same domain name spase.com at The Forum (formerly known as the National Arbitration Forum). I have no idea what he expected to accomplish with this but all he got was another loss.