GoDaddy has no Android App and people on Google Play think the “GoDaddy Investor” app is fake!

The GoDaddy Investor app… An app that could be so much yet it is next to useless.

It was supposedly rushed into making its debut for Namescon 2016 in January 2016. Since then no further development has been done. Nothing that we can see anyway.

People at Google Play are giving it some of the worst reviews as they don’t understand what it does. And some people say it is a fake app.

People say they can’t sign up to GoDaddy and when they do at godaddy.com they say the app has nothing on it. Of course it is!

The app can’t even be used to search for domain names in GoDaddy auctions. You have to go to visit www.godaddy.com, search for expired domains and only then you can bid for them using the GoDaddy investor app.

Of course the app can’t be used to bid on any other auction except for expired domains. So let’s say you have a list of names added to your watch list and then you forgot (or don’t know) that some are not expired domains. When you use the GoDaddy investor app they will simply not show up and you will probably forget about them.

Yes, GoDaddy investor app is a doing a disservice to GoDaddy. People will be less, GoDaddy will make less money.

And of course the app not only has it not improved but it has gotten worse. Notifications on Android stopped since at about January 9th, 2018. I was bidding on a name a few days back, made a bid 4 minutes before end time (I was lucky I opened the app at exactly 5 minutes before auction was closing as I did not receive the 15 minute warning), I was the high bidder and then I simply received no notification I was outbid and lost the domain. Now it seems that alerts are working again. 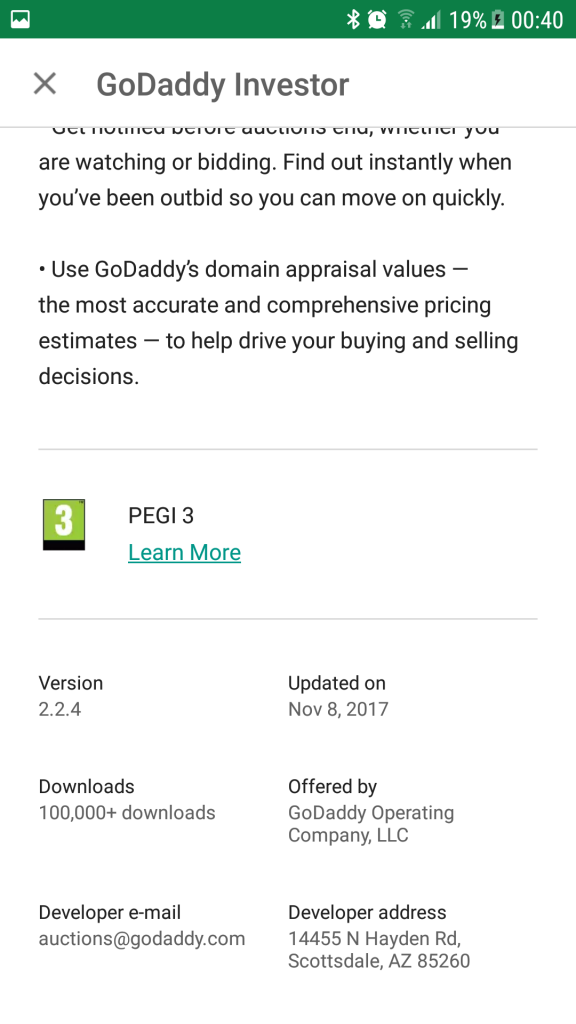 What makes everything worse is that GoDaddy currently has no app on Android. I had it installed last year but now when I try to open it it says: “We’re making changes. This app’s going away.”. Yeah, no kidding. The app has been pulled from Google Play so pleople looking for a GoDaddy app are only finding the GoDaddy Investor app that is not exactly what most people want. GoDaddy Investor app is only for bidding on expired domain name auctions and nothing else. 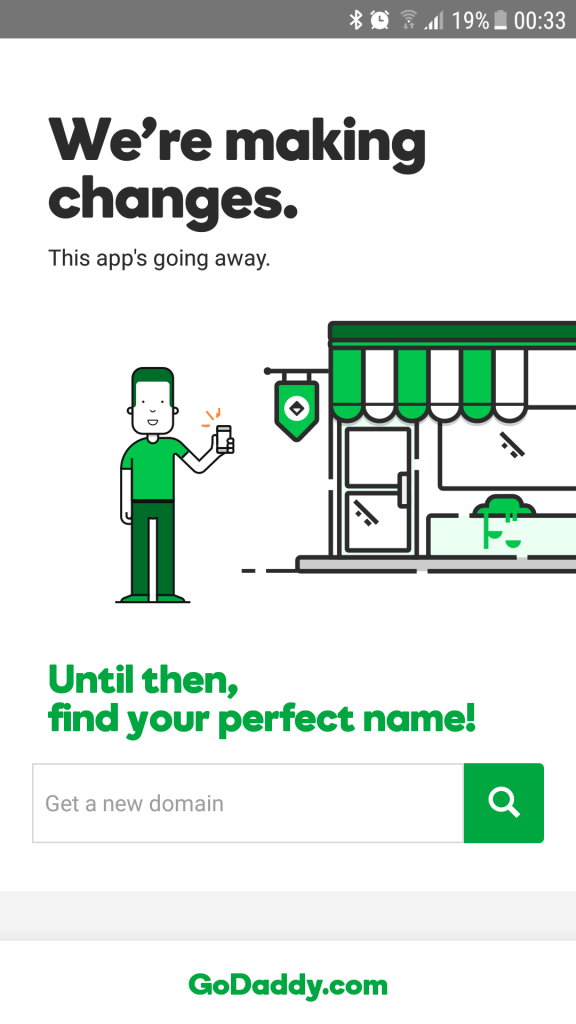 Now, the GoDaddy Investor app has more than 100,000 downloads on Google Play and a 3.9 review. I seriously double 100,000 people have downloaded the app to bid on domains. Many of these are GoDaddy customers that don’t know what is going on. At the time of writing there were 111 1 star reviews out of 526 in total.

Here are a few of the latest reviews: 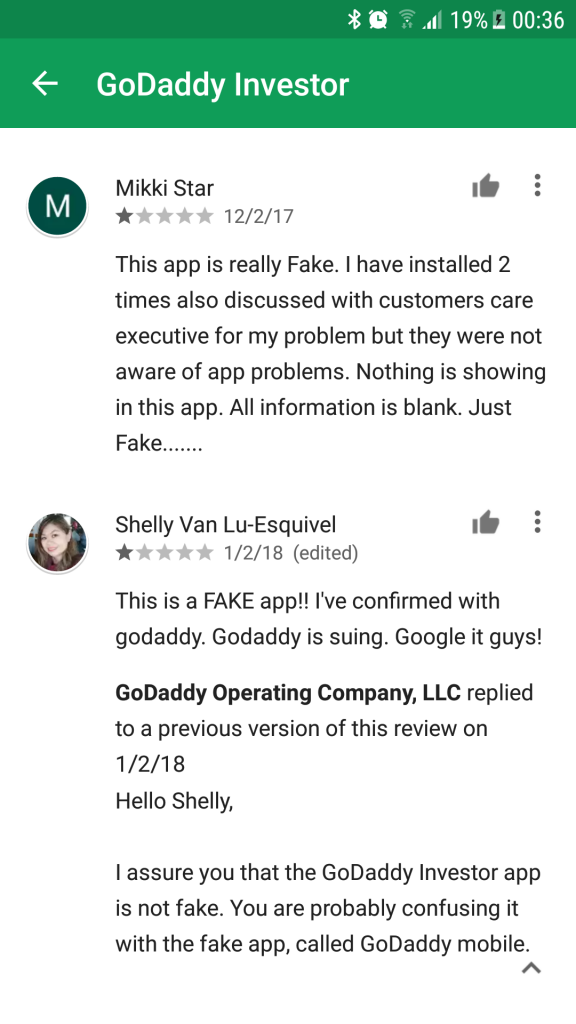 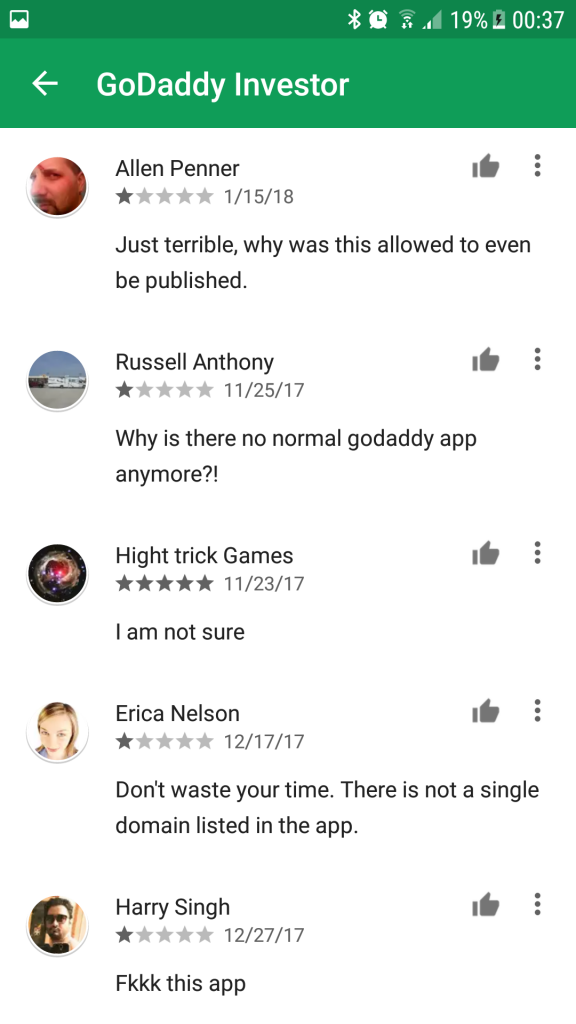 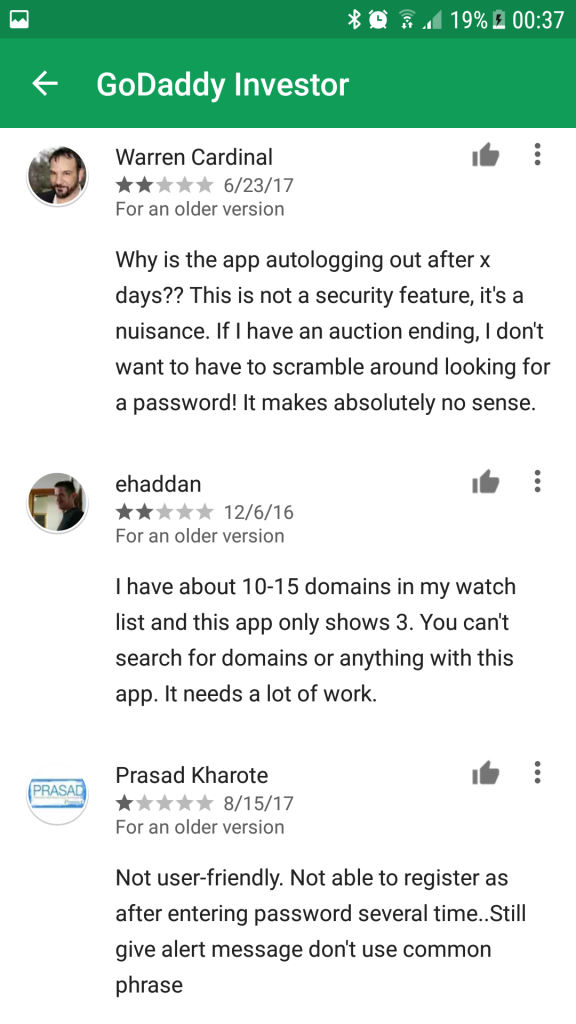 If anyone knows about Apple store I would love to know how the apps are working there.