Plan Bee LLC, the company operating the .build top-level domain, has been suspended in California.

The Beverly Hills based company has been suspended by the California Secretary of State AND the Franchise Tax Board.

The double suspension was caused by the company’s failure to file the required Statement of Information at the California Secretary of State and for failure to meet tax requirements (e.g., failure to file a return, pay taxes, penalties, interest) at the Franchise Tax Board.

During suspension, the business loses its rights, powers, and privileges to conduct business in California. This means that the .build New gTLD is currently run by a company that can’t conduct business. All this while the Internet Corporation For Assigned Names and Numbers (ICANN) has taken no action.

How is the company running the .build registry is unknown. The company is currently not allowed to conduct any business meaning for example that they can’t issue invoices to the registrars for domain name registrations and renewals and be paid and they can’t make payments to ICANN and their registry back-end provider ARI Registry Services.

The Plan Bee LLC / .Build registry agreement with ICANN can be found here. Article 1 of the registry agreement clearly states that the Registry Operator (Plan Bee, LLC, a California corporation) represents and warrants to ICANN among other that:

“Registry Operator is duly organized, validly existing and in good standing under the laws of the jurisdiction set forth in the preamble hereto, and Registry Operator has all requisite power and authority and has obtained all necessary approvals to enter into and duly execute and deliver this Agreement”

The registry operator of the .build extension Plan Bee LLC is clearly in violation of at least this rule and maybe many more rules in the lengthy agreement.

Plan Bee LLC’s CEO is George Minardos (the new CEO of Topcoin that also owns the Minardos Group) and the company’s agent is Thomas (Tom) A Brackey II that is the .build extension co-founder.

The .build extension has 3,721 domain name registrations today according to NameStat.org. That seems like a not sustainable registry.

I would expect that ICANN requires all registry-companies running the gTLD extensions to provide a certificate of good standing every year but I guess this is not the case. Unless the company was suspended very recently which I seriously doubt. Has the company gone bankrupt? Is the .build registry run by a bankrupt company and is about to go under?

ICANN has been caught not performing due diligence on the hundreds extensions so carelessly released and as an organization is responsible of providing securely to the general public. I can only imagine what a further search of all the other New gTLD registries/companies would reveal. All ICANN cares about is getting paid, having 6 or 7 figures yearly salaries for their executives and spending millions each year for travel and other expenses.

Here are the appropriate next steps on the “Registry Agreement Termination Information Page” in case ICANN needs any help finding the link.

More details and proof about the Plan Bee LLC suspension

A simple search for the company at the California Secretary of State website reveals the suspension: 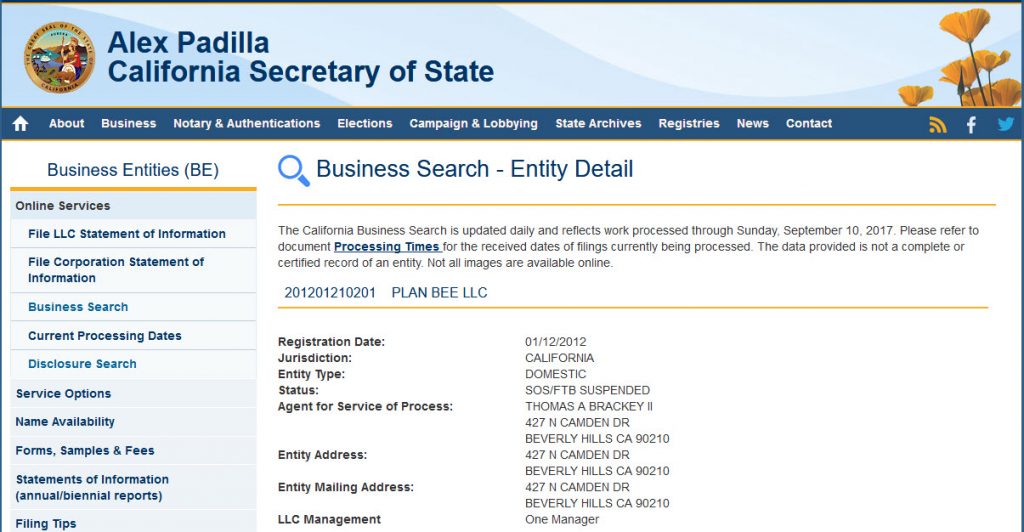 FTB Suspended or FTB Forfeited:The business entity was suspended or forfeited by the Franchise Tax Board for failure to meet tax requirements (e.g., failure to file a return, pay taxes, penalties, interest).

SOS/FTB Suspended or SOS/FTB Forfeited: The business entity was suspended or forfeited by both the Secretary of State and the Franchise Tax Board as stated above. 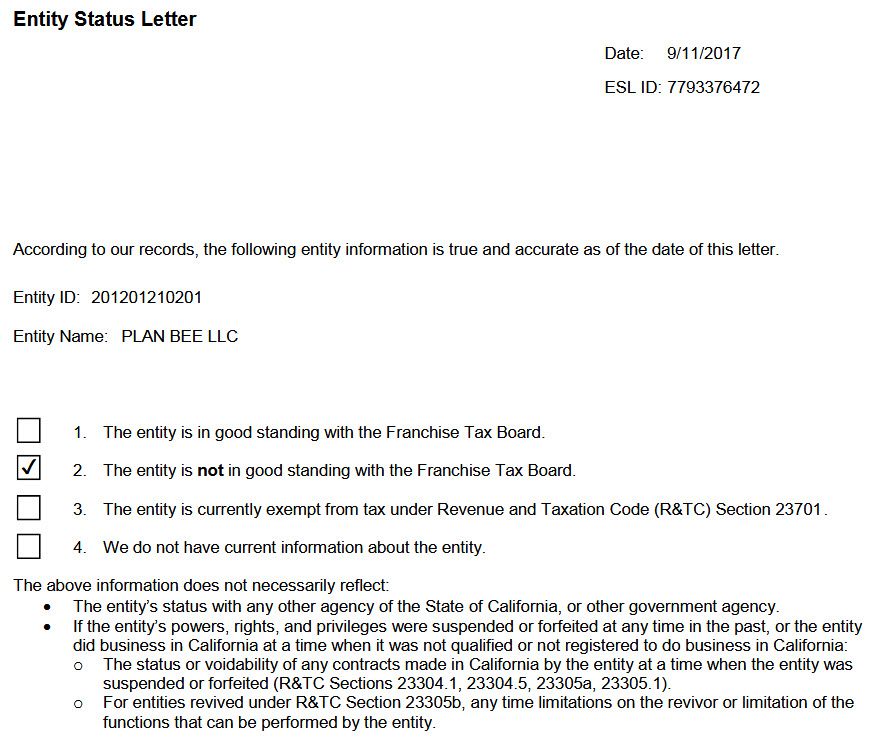 This company status is very serious. An article posted by the Law Office of Kristina M. Reed called “What to do if your California Company is Suspended or Forfeited” says:

“In California, a company can be suspended or forfeited by the Secretary of State (SOS) or the the Franchise Tax Board (FTB). The SOS usually suspends a corporation for improper filing. This usually occurs due to the failure to file the required Statement of Information and, when applicable, the required Statement by Common Interest Development Association. Under California law, a business is required to file a Statement of Information ever every year, or every other year.”

“The FTB usually suspends a business either because the business failed to file one or more tax returns or the business failed to pay its balance. This balance can include the penalty incurred by not not filing your Statement of Information in a timely manner. This means a SOS suspension can also cause an FTB. Your business may be suspended by either the SOS, the FTB or both. It is your responsibility to check with both agencies when you try to revive your business.”

This suspension does not seem to be some kind of temporary thing or a slight oversight.

Another company, WHAT BOX? HOLDINGS, LLC, that is located at the same address as Plan Bee, LLC and has the same agent, Thomas (Tom) A Brackey II, has also the same double suspended company status. The company’s CEO is Erik Ludwick.

WHAT BOX? HOLDINGS, LLC, Plan Bee, LLC, Thomas (Tom) A Brackey II, George Minardos and Erik Ludwick have all been involved in mysterious (or fake?) trademark registrations around the world with the sole intention of registering domains in New gTLD sunrises.

You can read more here about Erik Ludwick and George Minardos. All these people and companies own about 400-500 New gTLD domain names. I expect that in case of a bankruptcy these domains are going to be auctioned off.