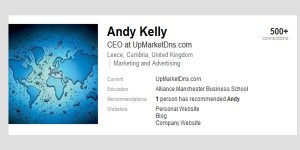 I got a complaint, from someone I believe is trustworthy, about “domain broker” Andy Kelly and a domain name transaction that started just before Christmas.

Trustworthy is exactly the opposite of what I think when I hear the name Andy Kelly in the domain name industry. I have written about Andy before and it wasn’t good.

So here is the story in short:

On the 29th of December Andy/Rachel made a profile post on NamePros.com: “I am Rachel and I’m representing my uncle Andy in selling his domains – whilst he recovers from major surgery. So it’s Business as usual.” He/she is continuing selling domains on Namepros.

1. Buyer to me:
I’m contacting you today because I did a search for “Andy Kelly” in google and came up across one of your blog posts warning about his tactics. Well, it seems I may have been scammed by Andy and his group. I say group because now someone communicating with me as “Rachel Kellly” says she’s his niece and is running his business while he is in the hospital. I will paste the message I relayed to ***** (Namepros.com) about this issue to give you the background info. Anyway, I just wanted to mention this to you and ask you if you know if he’s been involved any any similar scams? He could very well be ill and if so, I would feel bad about that, however, this is business and the way his niece had treated me was horrible. She cursed me off for kindly requesting a refund due to the SELLER not being responsive.

2. This is the complaint that the buyer made on NamePros.com:

I’m hoping you can help me here. It seems I may be getting scammed by a forum member on an outside deal.  The member is Andy Kelly and I purchased a name he brokered 5 days ago. I paid but then received an email stating the seller will push after the holidays. That was the first red flag.

Then a day later, his “niece” Rachel emails me and mentions that Andy had a heart attack and needed an urgent procedure done. That was shocking. I did not doubt it but then the next day after I asked how he was doing and for an update on the transfer of the name, Rachel says his condition got worse.

Then I simply asked when my domain will be pushed and she said she will follow up with the seller.

then the next day I asked again if the seller will push and I was getting worried as I had already paid and the seller seemed unresponsive.

I then decided to just revert and protect myself here. So I kindly requested for a refund.

After which then, “Rachel” went ballistic on me.

using curse words, etc. and saying how I was insensitive in lieu of her family’s situaiton.

well I understood the situation and I told her how sorry I was. However, this is business and it was not directed at her nor her uncle Andy Kelly

I just wanted a refund.

she denied it of course

that’s when things got really concerning.

anyway, to confirm if Andy really is offline and may be ill, I message him here on NP

and inquired about a domain name he posted about

supposedly a day after he had a heart attack

and I got a reply

not sure from who…as it could be his niece. Although I suspect it is not.

which of course makes my offer null and void

anyway, the whole point of me offering on this name was to see if I would get a reply. And I did.

I’m just really suspicious of all this right now.

I was hesitant to buy any domains from him and it actually sounded too good to be true. But I got suckered.

I offered to buy 2 domains: *******.com and *******.com for $500 each which was the BIN price. He got back to me and told me ********.com was sold but *******.com was still available. So I paypaled him the money.
Anyway, I will forward you the full email thread after I send this message.
At this point I filed a dispute with amex and hopefully I will get my money back. Rachel/Andy are not responding after 3 subsequent emails asking for the status.  This is down right fraud at this point as he has my money and told me he would not be refunding me.
I have also directly emailed the domain owner 3 times and he had opened all emails but did not respond. He is probably confused as to how his names got involved in all of this. That’s my guess but it sounds to be the case.
Also, one other thing, I messaged Andy on Namepros inquiring about another name he owned that he posted for sale on NP. He replied back very quickly several times and none of his messages indicated he was ill nor was it his niece. This guy is really doing some shady things and I think he’s been put in a corner and pressed for some cash. But even so, I don’t agree with how he’s conducting business.
The amount of $500 is relatively small but this broker really needs to be put out of business imo.
4. Buyer to me:
The update is: I got my money back. It wasn’t easy but since I paid via american express I was able to do a chargeback.
Andy/Rachel refused a refund despite numerous requests. They gave no updates to the domain ever being transferred. And Rachel continued to give the story about her uncle Andy recovering. I don’t believe it. I actually don’t believe there is an Andy Kelly. Their entire group (if it is a group) is very shady.
Anyway, I welcome you writing a story if time permits. I’m ready to support all claims. The only thing is I’m sure Rachel will continue with their story and will probably make you/I out to be completely insensitive in light of her family’s situation.
But again, I don’t believe it so I’m willing to fight her claim in an open forum ie. namepros, if needed.

Something to remember in the domain name business and when purchasing a domain name. Never ever send money by wire transfer, Paypal or Bitcoin or any other way that is not secure and does not guarantee that in case you don’t get the domain name you have paid for, you will get your money back. Even if the amount is relative low, if the seller is not someone you trust then you should use an escrow service. I have made deals both buying and selling through Paypal several times but it was with people I know for many years and trust.

Of course you should always use an escrow service for bigger amounts no matter how well you know the seller. Life sometimes happens.

You should also read the previous post I wrote about Andy Kelly in April 2016 called “Beware Of Domain “Broker” Andy Kelly – UpMarketDNs.com“. The post has 35 comments.

Is Andy in the hospital? Is Rachel real? Even if she is real then this is a very bad start in her professional career. Anyway, that is for you readers to judge this whole story but history is not on Andy’s side. I read all the emails the buyer forwarded me and Rachel’s style is suspiciously similar to Andy’s: rude and aggressive. If he is in hospital then I wish him a speedy recovery.