Global domain name growth has slowed down during the first quarter of 2019. That is not a concern to me as growth is bound to slow down sometime, especially for New gTLDs. We have enough domains as it is.

CENTR is the association of European country code top-level domain (ccTLD) registries, such as .de for Germany or .si for Slovenia. CENTR currently counts 54 full and 9 associate members – together, they are responsible for over 80% of all registered country code domain names worldwide.

The global TLD market is estimated at around 351 million domains across 1486 recorded TLDs. Median domain growth among these TLDs has decreased to a record low of 3.4% year on year (top 500 median). Between ccTLDs and gTLDs growth rates are similar, with a range from 1.4% for ccTLDs in the Americas to a high of 6.3% for African ccTLDs.

In global market share trends, new gTLDs, which include well over 1000 TLDs, have a little under 10% of the market and show no immediate sign of increasing that. The rest is made up of around 267 ccTLDs with a combined share of 45%. This includes .com, which is the single largest TLD with 40% of all TLD registrations and other larger gTLDs such as .org and .net, both of which have seen declines of around 1% each over the past 3 years.

This quarter, Cisco umbrella ranking data has been introduced to the report. The rank shows the most queried TLDs based on passive DNS usage across the Cisco Umbrella global network of more than 100 billion requests per day with 65 million unique active users, in more than 165 countries. It provides an impression on usage and popularity of a TLD and may give additional insight when viewed in conjunction with registration metrics such as domain count. 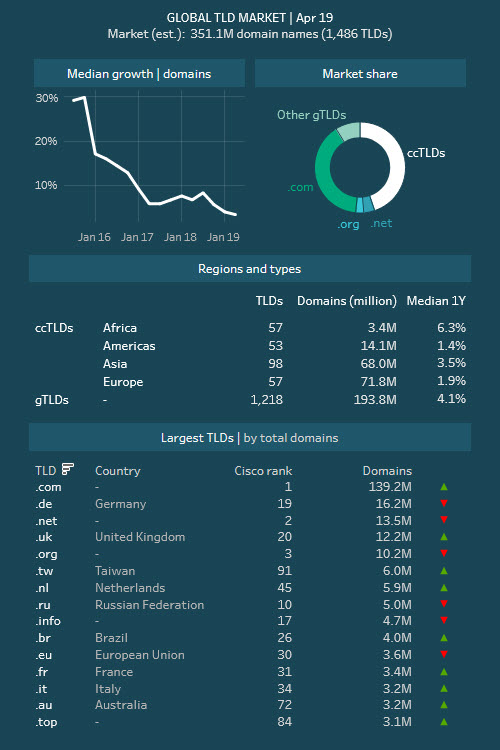 Across all recorded ccTLDs in Europe (57) there are roughly 71 million domain names under management. Growth in the sector has been slowing for years, most likely driven by a general slow down in new domain creations. In recent months, the long term growth trend fell sharply due to a bump in deletions. However this may now be stabilising due to a widening gap between creates and deletes. The median growth at April 2019 was recorded at 1.9% year on year with a high (relative to the other TLDs globally) median renewal rate of 84%.

Market share indicators provide a different view on uptake and loyalty to TLDs. Within Europe, the combined share of ccTLD domains is 61%. At country level, local ccTLDs have an average of 54% of the market share (based on domains registered by a registrant within the country). These figures have not changed significantly over the past few years, though other data sources such as Alexa domain ranks offer a different story. The Alexa rank of top 500 domains, which measures web pageviews per million in each country, shows an average of just 26% in favour of the local ccTLD, with signs of decrease. This figure should be treated with care given the small sample (500) of domains per country. CENTR will expand the sample and its analysis in coming editions of this report.

The ccTLDs who had the highest growth (by percentage) over the past 12 months were .pt (Portugal), .ie (Ireland) and .al (Albania). 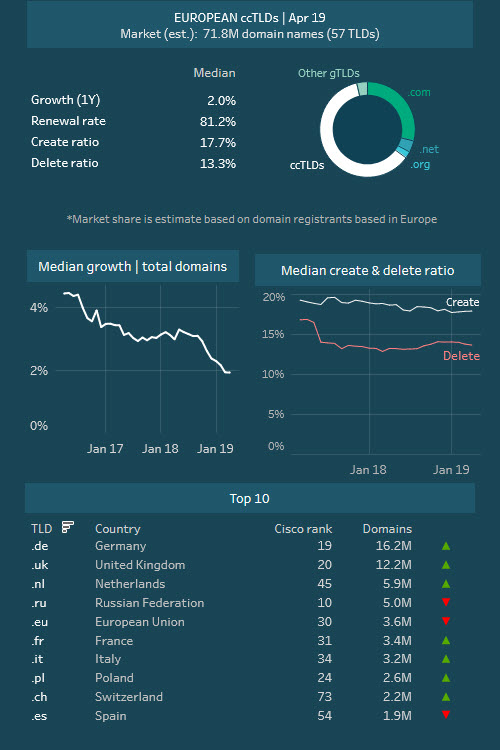 The combined domains under all recorded gTLDs globally total 194 million, 71% of which are under .com.

Median growth among gTLDs was 4.1% year on year (top 300) – its lowest recorded rate yet. Although the rate is still above the global average, gTLDs will face challenges in the coming months given other registration trends such as a declining create ratio, an increasing delete ratio and a relatively low renewal rate median of 64%. A silver lining to these figures is the median park ratio* (an estimate of the proportion of domains in a TLD which are used for parking or which have errors), which appears to be decreasing*. This may have a positive impact on domain usage and renewal rates.

Of the top 10 largest gTLDs by domain count, all are within the top 100 Cisco ranking list with the exception of .loan which ranks far below the group average, as well as having a relatively high park ratio*. 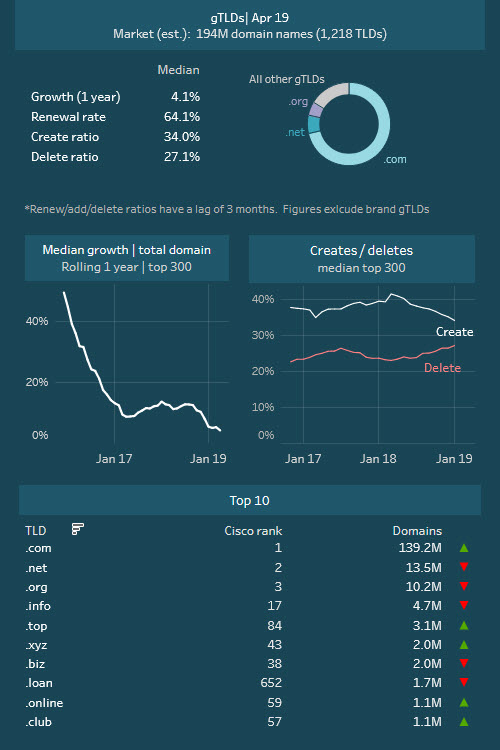