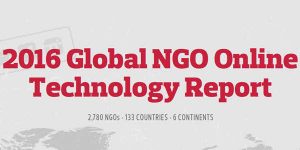 The Public Interest Registry and the Nonprofit Tech for Good published the report of a research project: “2016 Global NGO Online Technology Report”.

This is an inaugural effort to gain a better understanding of how non-governmental organizations (NGOs) worldwide use online technology to communicate with their supporters and donors.

The 2016 Global NGO Online Technology Report is based upon the survey results of 2,780 NGOs from Africa, Asia, Australia & Oceania, Europe, North America, and South America. The survey was conducted and promoted entirely online – primarily through email and on social media – from September 1, 2015 through October 31, 2015.

The data gathered from surveying 2,780 NGOs from 133 countries. The top five responders of the 2015 Global NGO Online Technology Survey were NGOs from the United States, Canada, India, the United Kingdom, and Australia.