Namecheap has banned all Russian customers from using its services in an email you can see below. This ban includes even domain name registrations. 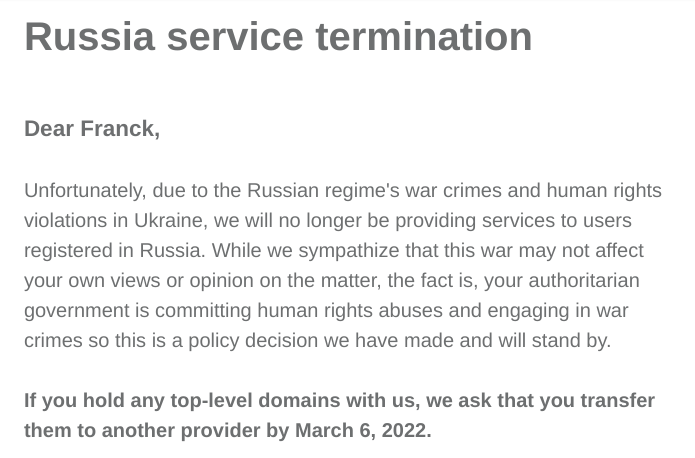 Namecheap also started offering free anonymous hosting and domain name registration to any anti-Putin websites for anyone located within Russia and Belarus.

Effective immediately, we will begin offering free anonymous hosting and domain name registration to any anti-Putin anti-regime and protest websites for anyone located within Russia and Belarus. Please contact our support for details.

War is always a terrible thing, it’s even worse when many of our own team members are on the ground. Our company stands firmly against Russian aggression and war crimes being committed against the people of Ukraine. Insuring the safety of our colleagues is our number one priority

Namecheap also issued this statement about their support response time and their staff in Ukraine:

“As you know, Russia has invaded Ukraine and is currently waging an unprovoked air and ground assault against the Ukrainian people. Namecheap has staff located around the world, with many of our support teams based within Ukraine.

Our Ukrainian family continues to inspire us with their resilience, their determination, and their selfless drive to help each other in this time of need. They have gone above and beyond, despite what is happening, to continue to contribute to helping our customers whenever they can while we continue all our efforts to get them to safety.

During this time, we may experience some load issues when it comes to providing help via our live chat or tickets. Please bear with us while we continue to adjust to the situation on the ground. Rest assured, our worldwide team is still working hard 24/7 to answer all of your support requests in the most efficient way possible.

If the situation changes, we will post updates on our Status page, on Twitter, and here on the blog.

Thank you for your patience during this difficult time.”