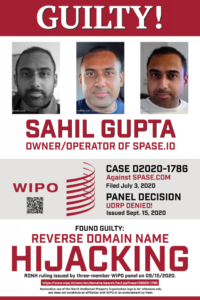 This time it was even worse. He filed the same UDRP complaint for the same domain name spase.com at The Forum (formerly known as the National Arbitration Forum). I have no idea what he expected to accomplish with this but all he got was another loss.

The Panelist Dawn Osborne said in the decision:

In this case the Domain Name was registered in 2005 long before the Complainant began use of and had rights in the SPASE name.

The complaint was of course denied and Sahil Gupta became one of those very rare idiots that get a Reverse Domain Name Hijacking TWICE for the same domain name!