If you received a subpoena from Enom you are not alone!

Yesterday I received a subpoena from the legal department of Enom. The subpoena is directed to Enom to produce documents and information in the premises of a civil action.

The email was not too clear as what this was about and what role in this was:

“Enom has received the attached subpoena, and your information came up during our search for responsive documents.

It is our policy to comply with subpoenas, and we are notifying you of this subpoena in order to provide you with an opportunity to move to challenge the subpoena in court.

Please note that at this time data production has been limited to a list of responsive domain names only, and not the full requested list of data as indicated on page 5 of the subpoena. Should this change, we will follow up with another notice.

We will comply with the subpoena by June 26, 2019 unless you provide us with valid proof showing that you have challenged the subpoena through appropriate legal means.”

At first I wondered if I owned the domain name that was mentioned in the civil action brought to a Virginia court that was the Exhibit of the subpoena. The domain was SCRATCH.ORG.

I own a few thousand domains and I am not always 100% sure if I own a domain name or not if I don’t check my records! I did a quick check and I found that I never owned this domain and I had not even made a bid for it in an auction.

I also found another older article about Ravi Lahoti that may or may not have something to do with this court proceedings and one of my domains: “Why UDRPSearch is forwarding to a page about a lawsuit“. Not sure if these 2 cases are connected.

I also visited SCRATCH.ORG and I found it to be a rather strange website as at the top of the homepage it displays the registration history of the domain name and all the registrars that the domain has been since 1998: 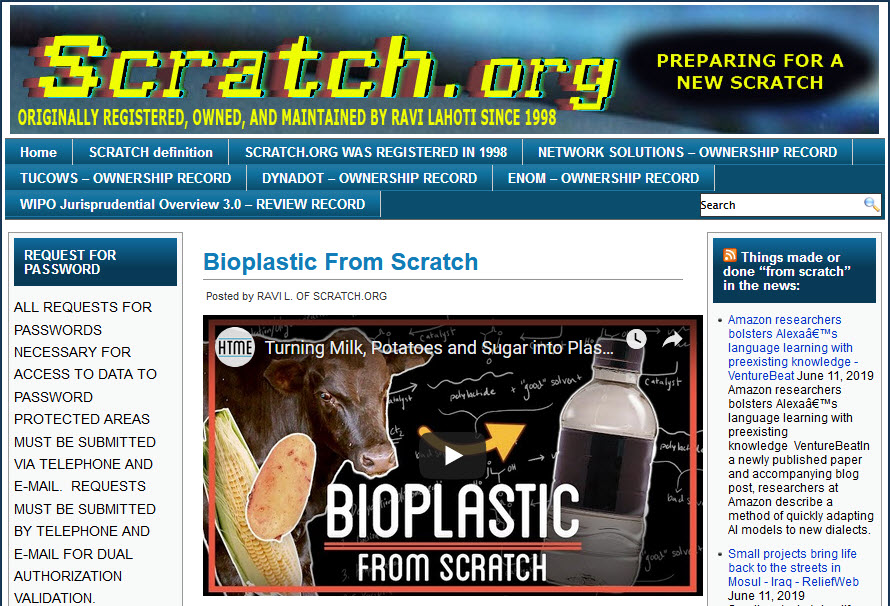 Anyway I contacted the Enom legal department and I got a reply saying that the email was sent to me because my contact information is referenced as the current or previous registrant or reseller of a domain name responsive to the attached subpoena. Enom’s intent is to respond to the subpoena with respect to the my domain, which will include the domain name as part of a list of responsive domains.

My domain name is UDRPUpdate.com which I hand registered in June 2013 at Fabulous. The domain dropped some time around March 2013 and remained free to register until I bought it. I don’t know who really owned the domain name before me and I don’t really care as I didn’t not buy the domain from the previous owner or had ever anything to do with Ravi Lahoti. I asked Enom why is my domain name included in their list but have not yet received a reply.

I also contacted David E. Weslow that is representing the plaintiff “Code-To-Learn Foundation d/b/a Scratch Foundation”. He had actually sent the subpoena to Enom.

He told that he had been contacted by a number of eNom customers who were notified by eNom of the subpoena that he sent to them. So I am not alone in this mess…

He guessed that I may now own a domain name that was formerly owned by the defendant in this lawsuit.

But my domain name UDRPupdate.com was not included in the subpoena, so it is not clear to David why eNom sent the subpoena to me.

He also told me that “you are not a target in this lawsuit and we are not seeking any information regarding your domain name(s). “.

I then noticed a few tweets from John Berryhill saying that David Weslow “is engaged in a fishing expedition” in the above mentioned lawsuit.

Attention recipients of today’s obscure subpoena notice from Enom. What is happening is that @DavidWeslow is engaged in a fishing expedition in this lawsuit: https://t.co/ea6jXKfQTb 1/3

John then said that “Not having any specific evidence of bad faith against the plaintiff in relation to that senior dictionary word domain, Weslow is going to cherry pick all the names that Lahoti ever bought or sold as “pattern” evidence to obscure that the mark is junior to the domain name.”

Not having any specific evidence of bad faith against the plaintiff in relation to that senior dictionary word domain, Weslow is going to cherry pick all the names that Lahoti ever bought or sold as “pattern” evidence to obscure that the mark is junior to the domain name. 2/3 pic.twitter.com/Px2osyavZr

Finally John said he had enough calls about this! 🙂

“So, if you ever bought or sold a domain name from or to one of Ravi Lahoti’s companies, then your data comes up in response to this part of the subpoena to Enom, which is why you received the notice from Enom. No more calls, please.”

So, if you ever bought or sold a domain name from or to one of Ravi Lahoti’s companies, then your data comes up in response to this part of the subpoena to Enom, which is why you received the notice from Enom. No more calls, please. 3/3 pic.twitter.com/cRu9pur7wj

I don’t like at all what is going on here.

David Weslow (that chose the wrong side to represent here) and the “Code-To-Learn Foundation d/b/a Scratch Foundation” are trying to strong-arm a dictionary domain name that was even registered many years before the foundation existed.

They have also created an unnecessary mess by issuing this subpoena that will have the whole domaining world mentioned in an irrelevant lawsuit. (Half the people I know now own a domain once owned by Lahoti as many of the domains I found in an old Lahoti list have dropped years ago: Mike, Page, HugeD, BuyD etc.) Maybe Enom has taken its role too seriously?

Also I don’t really appreciate people wasting my time for no reason. I wonder if we are going to receive many more emails like this from other registrars. My domain had nothing to do with Enom so this “discovery” can come from other registrars that may have received similar subpoenas.

This is simply ridiculous. I hope David does the right thing that stops this subpoena madness.

(I will update this story as it develops today.)