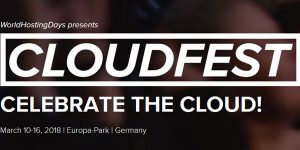 Schrems and Snowden were two of the people that convinced the European Parliament that the rules and regulations surrounding data privacy needed to be updated and resulted in the upcoming EU General Data Protection Regulation (GDPR).

Max Schrems is an Austrian lawyer, author and privacy activist who became known for campaigns against Facebook for privacy violation, including its violations of European privacy laws and alleged transfer of personal data to the US National Security Agency (NSA) as part of the NSA’s PRISM program.

Edward (via satellite) and Max (on stage) will have a discussion, on March 15, 10:30 a.m., on how we got here, whether the rest of the world is likely to follow suit, and whether GDPR is the ideal solution.

CloudFest, that rebranded from World Hosting Days, will be held March 10-16 2018, in Rust Germany.

CloudFest is a world-leading conference geared toward the cloud, hosting, and service provider industries. The conference expects more than 6,500 attendees from 2,500+ companies and 50+ countries.

CloudFest is the owner of the NamesCon conferences that just bought Domaining Europe. All conferences are owned by GoDaddy.