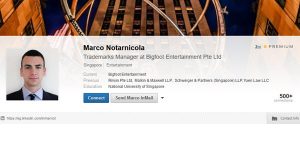 Meet Marco Notarnicola and his huge range of skills including “manipulation of TMs and common law marks to achieve UDRP “reverse domain name hijacking””, exploitation of legal instruments and trying to defend oppositions and cancellation actions against hundreds of invalid trademarks.

Marco Notarnicola is the “Trademarks Manager at Bigfoot Entertainment Pte Ltd”. You can find his past experience and current employment at his LinkedIn profile:

The most interesting part of his current duties at Bigfoot Entertainment (owned by Michael Gleissner) include: Bigfoot Entertainment is owned by Michael Gleissner. Mike Gleissner is trying to exploit the UDRP using hundreds of trademarks obtained without proof of use around the world and various shell companies like CKL Holdings N.V. that applied recently for 68 US trademark registrations. Michael Gleissner is trying to illegally obtain valuable domain names through reverse domain name hijacking (RDNH).

Mike Gleissner also owns CKL Holdings N.V. that is the company that filed for a UDRP against one of Google’s domain names Zero.com. They immediately terminated the complaint once they realized what they had done. Michael Gleissner is also the CEO of Fashion One.

I can give Marco Notarnicola that although he may be a liability to any company that hires him (if he posts his illegal duties on LinkedIn) at least his is stupidly honest.

Read more about his case here.