Report: The global TLD market is estimated at 344 million domains.

A report that covers the global status and registration trends in all top-level domains (legacy gTLDs, new gTLDs and ccTLDs), with additional focus on the European ccTLD market has been published by CENTR.

CENTR is the association of European country code top-level domain (ccTLD) registries, such as .de for Germany or .si for Slovenia. CENTR currently counts 55 full and 9 associate members – together, they are responsible for over 80% of all registered country code domain names worldwide. The objectives of CENTR are to promote and participate in the development of high standards and best practices among ccTLD registries.

The global TLD market is estimated at 344 million domains. The median growth of total domains over the past 12 months was 5.7%, which represents a small decrease compared to 12 months prior.

ccTLDs make up 44% of the global domain market, most of which comes from the European market. In percentage terms, ccTLDs in Africa have grown the highest over the past 12 months, although from a relatively small base. ccTLDs in Asia and the Americas have slowed down, particularly among Latin American and Caribbean ccTLDs where median growth was 1.4% YOY at October 2018.

Overall, domains under the new gTLDs total some 22.5 million – up 11% from 1 year prior. While many new gTLDs are growing well, roughly one third of the top 300 have contracted over the year. Larger legacy gTLDs such as .net, .org and .info have also seen declines, while .com has been increasing its growth rates. New entrant .app exploded into the market in the middle
of year and has around 320K domains so far. 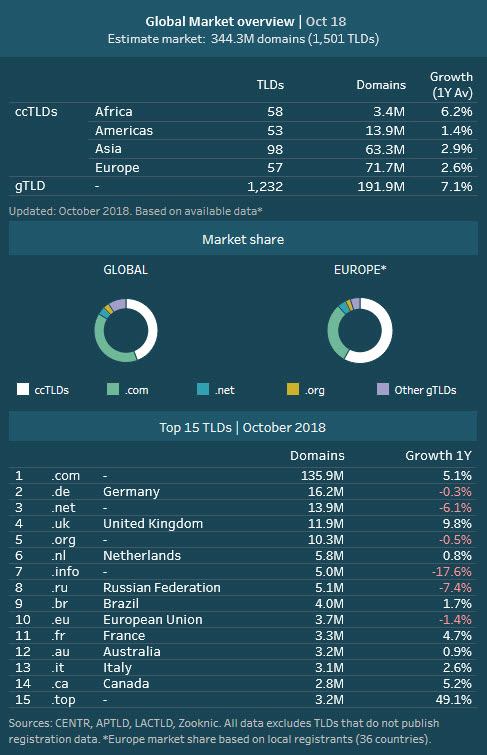 For many European ccTLDs, 2018 has been focused around GDPR. This has no doubt left some with less marketing resources, but despite this, registrations have continued with relative stability.
Although the long term growth average continues to decline, it is doing so at a much reduced rate.

At the end of the third quarter however, the median growth hit a new low of 2.7% (1.5% for the top 10 largest ccTLDs). Driving this decline was a sharp slow down in rates of new adds between March and August 2018, particularly among some of the larger ccTLDs. This was aggrevated by deletes which did not reduce at the same level. Despite this, the average renewal rate remained strong at a median of 84% (slighly lower at 81% among the top 10 largest ccTLDs).

Across Europe, the average local market share to ccTLDs is estimated at 58% for registrations and 37% for local web traffic*. In both cases, the figures are higher when filtered to central and
eastern European countries.

gTLDs across all categories are estimated at 191 million globally and had a median growth of 9.7% over the past 12 months (top 300). This growth is expected to be forced downwards due to increases in both the average deletion rate (see right) as well as declines in average renewal rates.

Growth rates in .com have been steadily increasing for over a year. The increase appears to have been driven by a noticeable upwards trend in average renewals (reflected in a higher renewal rate)
as well as a modest incline in the rate of new adds. .com’s growth in the past 12 months was 5.1% – this compares to a benchmark of 4.3% over the top 10 largest gTLDs. These figures may be
interesting to follow given the recent NTIA contract amendment repealing price controls on the .com wholesale price1. A wholesale price increase in .com may have the potential to impact the massive secondary market of domain speculation and warehousing of .com for some registrars. This, coupled with the increasing awareness of new gTLDs may result in a changing gTLD landscape in the future.