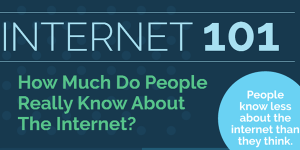 Public Interest Registry, the not-for-profit operator of the .org, .ngo and .ong domains, debuted the findings of its first Internet 101 Survey, a study testing basic internet knowledge among U.S. internet users of all ages and backgrounds.

The results of the survey make it official: people know very little to nothing about how the internet works and what domain names are and do. (Like I didn’t know this…)

The survey found that while 84 percent of people reported they are “knowledgeable” about the internet, there’s a significant gap between perception and reality. For instance, only 20 percent of consumers knew that the World Wide Web is different from the internet. The below results show how basic internet facts can stump many internet users.

While the survey revealed a handful of widely held misconceptions about the internet, consumers did fare slightly better on the below questions.

Battle of the Ages – Millennials vs. Boomers

Millennials may have grown up using the internet, but users from the boomer generation are more knowledgeable than both millennials and Generation X when it comes to basic information about the internet, from online safety to internet operations. Here are a few areas where boomers outpaced their younger counterparts.

“The survey revealed that 50 percent of U.S. internet users think more people globally are connected to the internet than actually are, which is a reminder of the work that must be done to close the global internet education and the internet access gap,” said Public Interest Registry CEO Brian Cute. “Public Interest Registry hopes this survey will not only educate, but also help spark dialogue around internet issues such as access, cybersecurity threats and more.”

Internet 101 – What You Should Know

There’s a lot for users to learn about the internet – how it works and the issues impacting future internet regulation and access. Of those surveyed, the average user has been online for 17 years, which shows that long term internet use alone does not equate to a better understanding of this powerful tool. Users must be provided the resources they need to more confidently use the internet. Below are few facts to get up to speed on the basics.

For more information on the Internet 101 Survey and to test your own knowledge of the internet please visit https://pir.org/internet101/.